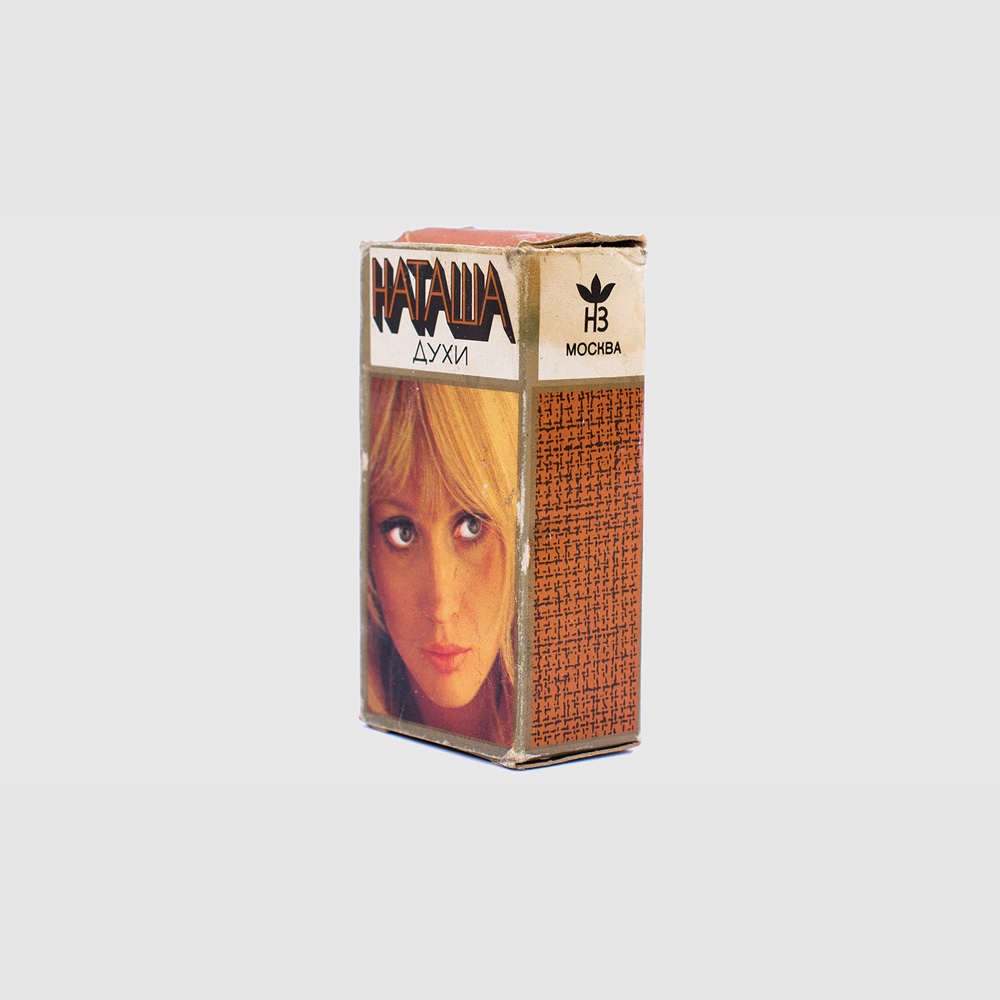 These small vials of perfume were found in the second-hand shop in a small village in Estonia. They were used in the Soviet Union by women and probably by men, also. If you opened the bottle, you would be encountered with a smell so pungent piercing your senses. Smell is a code of a-signifying nature, which passes the signifying encoding of language. In this way, smell is like a tiny machine, which correlates with the other symbolic, signifying or a-signifying machines, like pheromones, that function through natural encoding. Simply, a perfume is a carrier of information. It is deeply contextualised and therefore perfume is also very precise of encoding status, race, class, ideology or ethnicity. Still, it is a flask, one in each photograph — singular and at the same time generic. Each one evokes a humane response, even care. They may resemble commercial photographs. It is as if these glass objects would carry on some ideology of class and value, which have been made away with economic transformation long time ago. Nevertheless, what remains in this regard is that it is the economy, which functions as the determination in the last instance. To encounter this sufficient reason of capitalism, we should regard these objects, bodies and odour not through the exchange, but as strangers to the world; the carriers of the unprecedented and instantaneous cleft for a reason. Odour, which endures, when the vanity of the game is put to an end.

In Silesia, the everyday experience of life is mixed with neoliberal excitement and infinite misery. The mining industry had almost entirely vanished but had left the remainders of it in the environment, where mining tunnels under the city occasionally led to the collapse of buildings. At the end of the project, when I was performing for the people from whom I had received stories of the place, I came to understand that our meeting in the performance was like folding and intertwining paths. In discussion with Mikko Jakonen in Bytom, in January 2013, he perceived the performance as a fold, where the life experience of the people from Bytom was undulated in rhythm with my brief experience and interpretation of the place. The connection was both conjunctive ‘and…and…and’ and disjunctive ‘either/or’. That is to say, our paths did not meet, but intertwined and undulated in the mess of the place, like the underground tunnels under the city centre of Bytom.
Each visit to Bytom lasted for a week or less. These visits consisted of workshops, interviews, field trips and other events. In between the visits I was working with the material gathered in Helsinki. My initial question for the project was this: “How has life changed in the past twenty years in this particular context, a post-industrial town in Upper Silesia? First, I asked the participants of the first workshop held in CSW Kronika to describe and draw on paper a map or a diagram of the areas of Bytom with which they had some affective connection. Following this, I explained what a function of a ‘refrain’ was, and asked whether they could map out affects or themes in their everyday life. Were there certain areas which would seem ‘better’ or ‘safer’ and, conversely, which places made them feel dislocated or lost? After the descriptions, we visited those places with the working group. At the site, they described it about their understanding of refrain or affect. On the follow-ing day, I made a trip by myself to those sites, photographed them and made notes of what I felt, in turn, or how the place affected me. These workshop participants were my initial ‘tour guides’ to the affects of Bytom.

Other performances and events were related to the project. 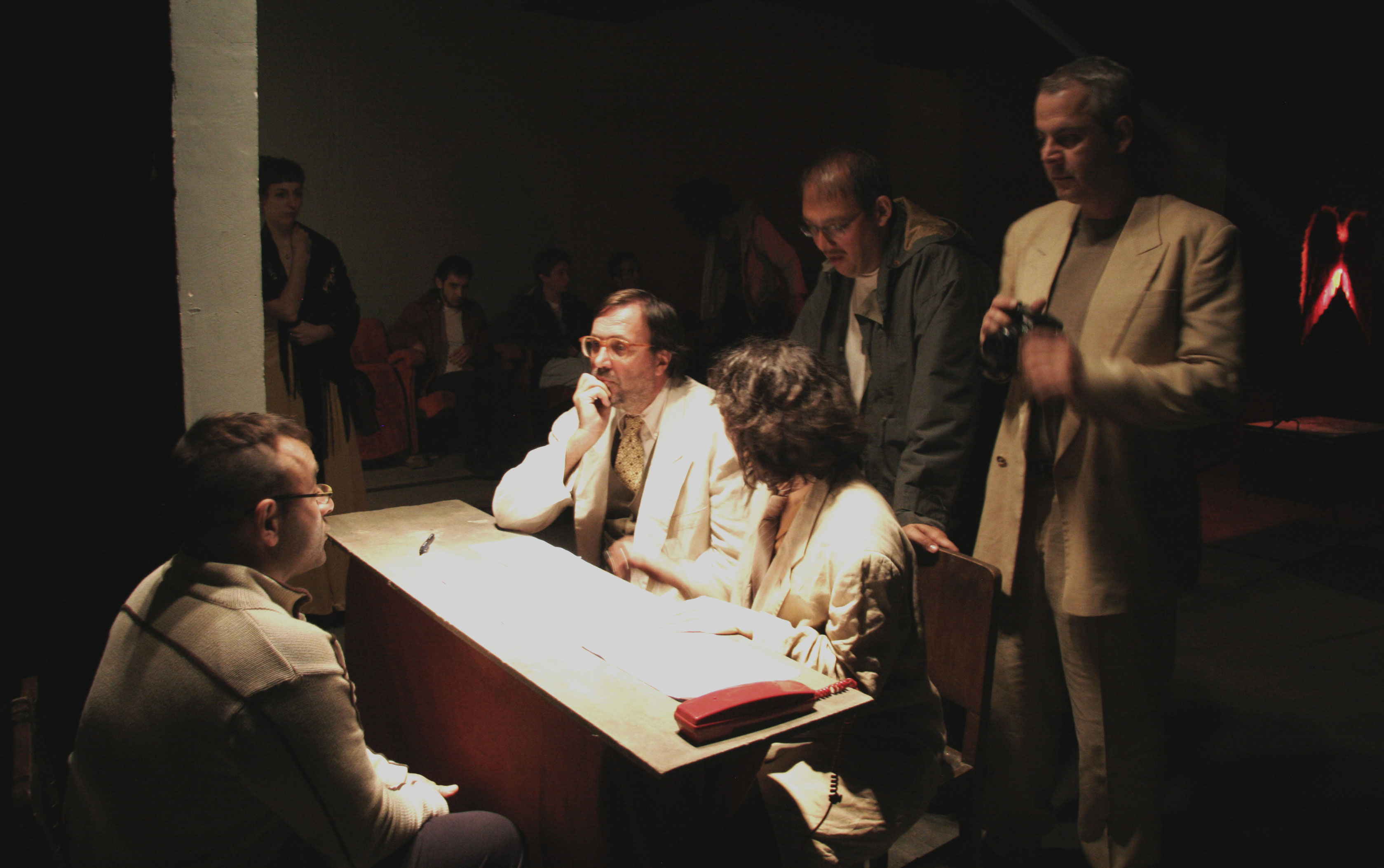 On 25 November 2011 a group of people interested in schizoanalysis and its adaptations to practice set sail from Lisbon to São Paulo on the cruise liner “Splendour of the Seas”. The group included the schizoanalytic practice group Ueinzz with the philosopher Peter Pál Pelbart, the dramaturges Cássio Santiago and Elisa Band from São Paulo, Presque Ruines with the film-makers Graeme Thomson and Silvia Maglioni from Paris and mollecular organization from Helsinki with Akseli Virtanen, Klaus Harju, Luca Guzzetti, the artists Kari Yliannala, Karolina Kucia, Ana Fradique, the cinema photographer Lennart Laberenz and me. There were over forty of us, but still we were a small group on this massive entertainment island cruising across the South Atlantic Ocean for two weeks. Our codex was a small script, Projet pour un film de Kafka, which Guattari never published in his time, but was later translated by Gary Genosko. This short essay served as a starting point for group experiments and the developing of the film Kafkamachine. In the depths of the financial crisis, and with our keen interest in new forms of producing subjectivity, collaborative practices, minority and contemporary utopias, this was our attempt to confront these issues in the middle of the ocean – not alone, but surrounded by the hypermarket of a vessel. We performed Kafkamachine twice in Brazil and shot hundreds of hours of material during the trip. The vessel came to be an institution which made people feel anxious and suffer. Around us was the amazing ocean, but the boat was made to distract us from the changing surroundings by zumba classes, whirlpools, nightclubs, Michelin-type restaurants and what else. 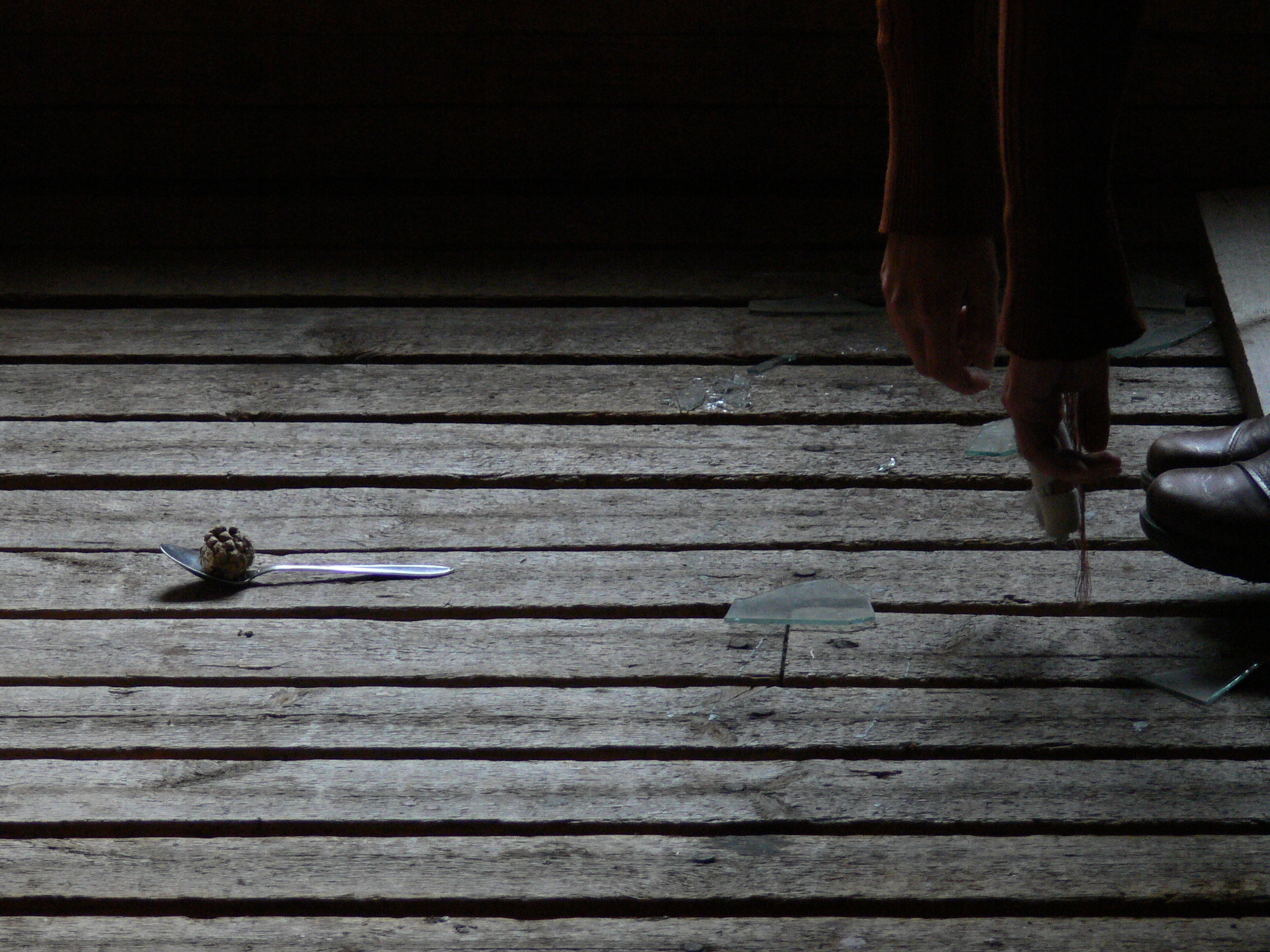 The function of an artist ‘as performance’ has been keenly appropriated into the discourse of cognitive labour, affective labour or as societal care. Following this, performance is practice, where the purpose of the action is found in itself, and that performance artist, like a pickpocket artist, is a virtuoso. Performance finds its fulfilment in itself but requires the presence of others, also. This workshop was directed for the people who work in the field of culture: artistic practices or productions. Moreover, it happened in the one of the most economically grim areas of Finland, in North-Carelia. We searched for the way to work with these affects and emotions of difficult nature. The workshop took place at the old and abandoned pinecone ‘fall-off’ plant, where millions of pinecones were dried in the past decades for the purpose of disseminating the seeds for the forest industry. In this abandoned site we created an different kind of machine, for the new worker in the field of affective and cognitive labour. The workshop applied the methods of group practice from Anna Halprin, Anthony Howell, Lygia Clark, Félix Guattari and OuLiPo.

A calendar project done in different locations in Europe, with the same posture.
Photos: Karolina Kucia

A memory of a night-walk in the Christmas-time in the mountains with Karolina Kucia, between Poland and Slovakia.

In Sudeten, there is one photograph presented. It is a photo of man lying down on snow, by the river and pines. This pose was originated in a practice that I did with Karolina Kucia in an old, vacant, bourgeoisie style apartment in Poznan in Christmas 2004. The pose appeared as a pose of combination of rapist/raped, a pose of humiliation and loss. In the walk in the mountains between Poland and Slovaki, some days after the practice, this pose reappeard – and in fact became a series of photographs with the same pose, but different landscape. Pose also appeared in a series of performances that Kucia and I did later that year. A concept of ‘sprezzatura’ came to our minds; which means

an easy facility in accomplishing difficult actions which hides the conscious effort that went into them.

Sprezzatura has also been described as a form of defensive irony the ability to disguise what one really desires, feels, thinks, and means or intends behind a mask of apparent reticence and nonchalance. 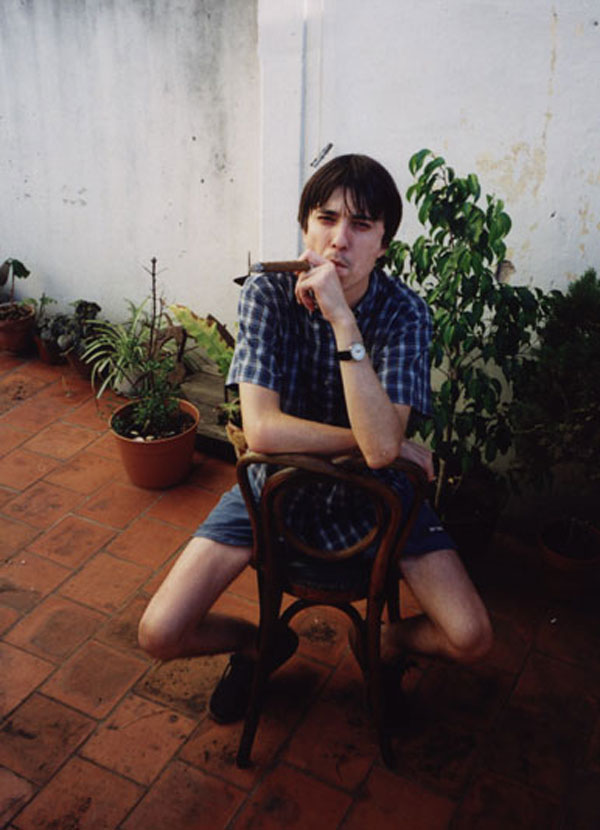 A book art project which happened during the change of the millennium, globally in several places at the same time.

We from the Hotel FinLandia have arranged a meeting/discussion about the concepts behind the project and general thoughts it arouses in your minds. You are invited to this informal talk on Monday the 17th of April, at 3 pm in the Project room Schip. Els Hoek will also participate the discussion.

Here are some questions and remarks that were the starting points for this project, or which appeared during the process. We hope that the questions will help you to refresh your memories, create oppositional opinions, and in general help you to re-think what it was all about. And also what questions important to you, have been left out, but you’d like to bring them up to this discussion.

Welcome,
On behalf of the Hotel FinLandia 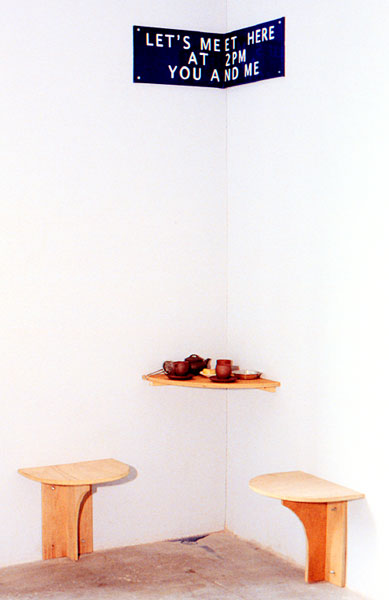 Rijksakademie van Beeldende Kunsten, Amsterdam
An installation inside the academy building. I came there everyday with cigarettes and tea for two, to meet someone.
Chairs, tables, and an enamel sign.